Important performance measures for the hotel industry are the average daily rate (ADR),, the revenue per available room (RevPAR), and the occupancy rate of a hotel. In order to achieve the most accurate performance indication, these benchmarks should be analyzed together. 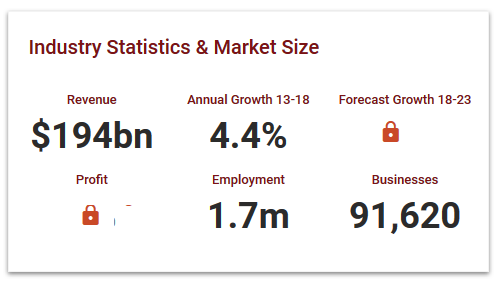 Statistics & Facts on the Hotel and Lodging Industry

Statistics & Facts on the Hotel and Lodging Industry

The global hotel industry was forecasted to generate 550 billion U.S. dollars in revenue in 2016. The hotel company contributing the most to this figure was the British hotel chain InterContinental Hotels Group which, in 2015, made 24 billion U.S. dollars in over 4,800 hotels worldwide. Other major players in this industry include Hilton Worldwide and Marriott International with 4,278 and 4,424 hotels, respectively, across the world.

While the Hotels and Motels industry is highly susceptible to changes in the global economic environment, the industry has experienced robust growth over the five years to 2018. Increases in travel spending, corporate profit and consumer spending have driven industry revenue growth in each year since 2013. Strong economic growth during the latter half of the five-year period and rising domestic and international travel rates have provided boosts to industry performance. As a result, the Hotels and Motels industry has outperformed the broader economy over the past five years, driven by a combination of high demand from leisure and business travelers and international tourists.